Any "dibsers" on your block? 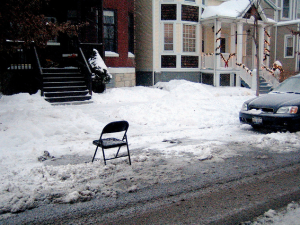 “Dibs” is a newly applied name for the practice of marking a snow shoveled parking space for personal use, usually with old furniture or jetsam from a basement. The more blatant scofflaws use stolen traffic cones.

(It’s technically a misuse of the term dibs, because any self respecting native speaker of Chicago-ese knows that you can’t “call dibs” to reserve something that’s already yours. Eric Zorn of the Chicago Tribune accredits (blames) fellow columnist John Kass for the first use of the misnomer back in 1999. Sad to hear, because Kass is so often on target with his Chicago memorabilia. But admittedly, it is useful to have a short name for it.)

My modest south side bungalow neighborhood only recognized the practice from afar after visits into the “rougher” parts of the city such as Back of the Yards, pre-University Taylor Street and Chinatown. On 60th Street, it just “wasn’t done”. 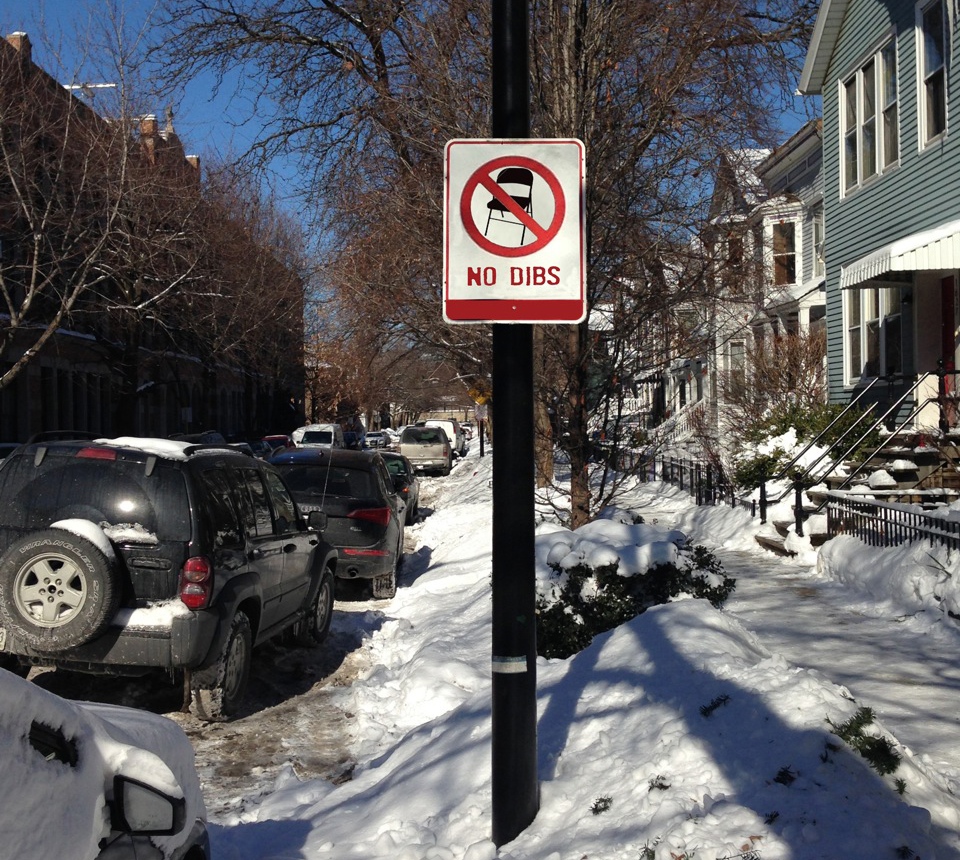 It still just isn’t done in Lincoln Park or the Gold Coast or in the renovated areas of Bucktown/Wicker Park. Since my gut instinct is not that affluent people are basically kinder, there must be some other sublimation at play.

A Chicago Albany Park woman was arrested this past winter for vandalizing someone’s car who unwittingly didn’t see her markers and parked there under the impression that it was just a city street. (See the article woman-keying-mercedes)

The primal craziness of thinking that it’s workable to reserve a public space after expending a little effort should be obvious. Just imagine the ensuing uproar if you were to build a little tin shack on the beach and expect it to be your private cabaña for the season.

If you expand to absurdity, imagine everyone doing “dibs”. We would all drive around endlessly past an array of kitchen furniture without a single spot to park until we returned home to our own reserved space.

Now, the Dalai Lama would probably suggest that everyone should shovel two spots and donate one to the community. I am not the Dalai Lama and my urge is to pile a mountain of snow atop the dibs markers to bury them in a haughty display of  “take that!”

Chicago’s administration allows the practice by not enforcing existing laws, but they do declare a No-Dibs date and send out crews in the spring to remove the markers.

I propose a ticket system to fine offenders and a reward/bounty for neighbors who rat on the dibs-ers. $100 fine and fifty bucks to the (good) rat.

Neighborhood groups could declare “dibs free zones” and pass out window posters, like “We call police.” “We Rat on Dib-sers”, or the more correct, ” We report on Dib-sers.”

There is an upside, however. An upside good enough to ultimately make us thankful for dibs. As offensive as it may be to have this banal display of possessiveness intrude on our lives, we should actually thank these people for identifying themselves. These are the same people who will be hacking down your bomb shelter door to steal your food if the post-apocalyptic melee, always looming, ever does materialize.

I will back-pedal just a tad to allow a moral dispensation for those misguided participants who live in heavily infested dibs neighborhoods. Some claim that there is a “tipping point” beyond which everyone must participate or the holdouts may need to ride forever, never to return, like Charlie on Boston’s MTA.

It’s better to know the mettle of your neighbors than not. And at the risk of sounding simplistically dualistic, there are only two kinds of people in the world, those who would and those who wouldn’t.

Would you or wouldn’t you? Take our poll below to tell us how you feel.