Manifesto of the Whimsical Anarchist

A Little House…a Rolling Prairie. What more could you want?

Does anyone like to be told what to do?

We are all anarchists at heart. Who wouldn’t prefer to have no rules to limit our own behavior? But we must admit, however grudgingly, that some conventions are useful, if not necessary.

There are too many rules… It’s now illegal for my kid to be paperboy, illegal for my dog to run in the park, and illegal to buy a bag of apples at Williams Orchards in Rolling Prairie, IN and take them home to Illinois.

Language, for example, is likely to have been one of the first conventions agreed to be useful even to anarchists. “Please pass the salt,” is just plain functional, philosophy aside. (Students of Noam Chomsky would probably argue that you can’t have language with philosophy aside, but that would be a different blog.) However simple, the request, “Please pass the salt,” embodies the essence of human cooperation. I won’t go into much detail, but imagine if that request for salt was met with the response, “Make me.” – Oh boy.

More than a few years ago in my Alyeska Pipeline days, I had a beer at an Alaskan bar outside Juneau. Seated next to me was a plaid-shirted grizzler who had moved to Alaska because his home state of Montana had gotten too crowded and had too many rules for his liking.

As an aside, he boasted that he had killed over a thousand eagles in his day. His reason was that they ate salmon and he saw them as competition. Luckily for me, at the time I was amidst a 22 year abstention from eating fellow vertebrates, and so, not being a competitor for his salmon, I didn’t feel immediately endangered … other than spiritually.

As abhorrent as this image was to me, as I imagined all 1000 eagles on a single pile, I nonetheless had a grudging appreciation for his political stance.

There are too many rules, and more every day. It’s now illegal for my kid to be paperboy, illegal for my dog to run in the park, and illegal to buy a bag of apples at Williams Orchard in Rolling Prairie, IN and take them home to Illinois. (without registering the purchase and paying the Illinois Use Tax) We have all become criminals.

Politicians…forget about it, there is just no incentive for any of them to un-do something. I think I would vote for King Kong, if he would promise to remove 2 rules, any rules, for every new rule that he enacted.

Frustrating, I know, but what are we to do? Shall we stand ensemble, at an appointed time and shake our collective fists at the sky? Or shall we, as my wife would suggest, look at the bright side?

My wife suggests that I look at current day Italy, where she spent some time studying while in college. The Italians are in a worst debt crisis than even Illinois. Their unemployment has risen recently to an astronomical 13%, and the social services, workplace rules and pensions have already drained the will of most entrepreneurs to take risks with new job creation. As one of the PIIG nations in the E.U., they are having almost as difficult a time as Greece, neither of them could sell a bond issue at a garage sale. 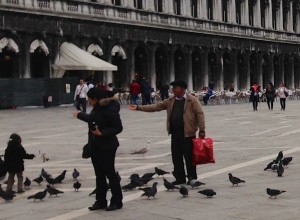 Nonetheless, she reminds me, looking at the clock, right about now there are millions of Italians sitting down with their friends and families, laughing, loving, having a great dinner and enjoying the beauty of their surroundings. Enjoying life.

I sometimes argue feebly that they have better food, but I get her point.

The important things in life really are free. Our best attempts to improve our lot in a hierarchical society are for naught if we lose our sense of humor in the process of making things better.

So, this blog isn’t a rant, it is an attempt to gently point out the idiosyncrasies of human nature in a way that, I hope, will inform us to make better choices.

… we may have every reason in the world to be angry … we just don’t have the time.

Its goal is to “shine a light on the beast” with punctuated lightheartedness. Punctuated by seriousness…not rage.

It is also a forum to gauge the sentiment of at least a few of us and share opinions. And let’s keep it lighthearted, serious but lighthearted.

Even though we may have every reason in the world to be angry … we just don’t have the time.

Thanks for tuning in.

2 comments for “Manifesto of the Whimsical Anarchist”