Immigration has been a timely topic for a while now. Everyone seems upset. Everyone seems polarized. As usual, there is little entertainment value in a moderate, reasoned approach. Thus, we appear doomed to a media circus pitting the “Free-them-all-ers” against the “Off-with-their-heads-ers.”

The polarization, this time, seems to have swung a little to the left politically, since any suggestion for fair enforcement of reasonable immigration laws is apt to be derided as racist. The “Free-them-all-ers” seem to be in denial that Reagan tried an amnesty program in 1986 and the result not only didn’t work but facilitated the mess we are in today.

But, there also remains no lack of accusations against calls for compassionate enforcement. The political Right acts like leniency of any kind is a veiled political attempt at populist vote getting.

What would happen at Disneyland if cutting the line was allowed?

The human nature revealed in the style of the debate is just as fascinating as the issue of immigration policy. It is difficult to discern the motives of folks who appeal to emotions only. It is all too easy to hide an agenda behind “the value of one human life.”

Many, if not most, of the arguments for re-vamping the current laws start with “human interest” stories, outlining the plight of one hapless individual who just happened to be in the US without papers. The more innocent and pathetic the better; it’s like a modern Queen for a Day.

Addressing the issue of immigration law by giving a specific argument in favor of one person, or “Pro Homine,” is the logical equivalent of saying, “Harry shouldn’t have to stop at red lights because he is such a nice guy.” But, on the other hand, policymakers need the input of multiple anecdotes to allow them to “connect the dots” and formulate sane law. We can only hope that our politicians look out for our interests with compassion and sanity. I, for one, am not holding my breath.

Two acquaintances of mine, Paul and his wife Maria, (their names have been changed here) were concerned about Maria’s undocumented status. Paul is a US citizen from generations of US citizens. Paul’s Dad was born in Puerto Rico, Paul was born here. I met him when he worked at a nearby Whole Foods Market.

A “pro homine” argument is meant to distract you from the issue at hand, and focus on the plight of the person.

Maria was a Mexican national, “sin papeles”, without US documents. They met and fell in love. They were officially married in Chicago and had a child together who was born here. They wanted to do the right thing; they love the USA and wanted to comply with the immigration laws. I, and others, urged him to document his wife’s status and apply for a green card. She is the mother of a US citizen, the spouse of a US citizen, gainfully employed, a model immigrant. It seemed a shoe-in to have her status granted.

He approached I.N.S. and applied for her legal status here. They expected some rigmarole because she did not have a valid visa at the time of their marriage in Chicago, but “How bad could it be?” After all, they lived in Chicago which was one of the first and still foremost, “Sanctuary Cities” wherein the mayor announced that law enforcement was not allowed to even inquire about a person’s immigration status, and local officials openly flout the federal immigration laws.

It was bad. She was deported! She was deported while tens of thousands (I read that number) of illegal residents are freely walking the streets and working openly and joining gangs in Chicago. She was deported while the young man, “sin papeles”, who rear-ended my minivan in Lincoln Park, admittedly earnest and repentant, was allowed to walk away with no insurance, no driver’s license and no consequence. Maria was deported for having revealed that her visa was expired when she got married. She took their son and spent two years back in Mexico waiting for the wheels of bureaucracy to turn while Paul stayed here to work, support his family, and pay the immigration lawyer’s fees.

Anyone who wants to get into the USA and tries to do so legally stands to be made into a fool or, in my preferred nomenclature … a chump. Paul and Maria… and I, albeit to a hugely lesser extent, were definitely the chumps in that one.

An employer can’t check for a valid Social Security number before hiring somebody, and can’t fire them if the number they provide after hiring is fake. The Department of Justice has put employers in a “Catch 22”.

Several, more gentle it seems, years ago, a long-time brown-skinned employee named Arturo asked me if I would sponsor him to become a US citizen. Arturo’s face mirrored the topography of the Andes mountains. He was a diligent and trustworthy janitor. At various times and in sundry situations spanning 15 years, I had employed his step-father, his step-brother and his wife. He preferred to work alone as a janitor because, he said, the profane language of the Mexicans in other departments offended his delicate Incan sensibility.

He referred compatriots for hire as well. Spear-headed by one of them, named Mario, a rag-tag group of dissolute Chicago hipsters banded together long enough to send several computers to a high school in Cuenca, Ecuador, starting an I.T. program there.

“You have to write a letter.” said the I.N.S. rep. “You have to say how much money you paid him and how long he worked for you.”

“You want me to put in writing that I employed an illegal alien for 15 years?” I balked, “What’s the penalty for that?”

If it isn’t already too late, I will make a long story short. I hyperventilated and wrote the letter. He became a citizen and a few days after the citizenship induction ceremony … he quit his job and moved to Minnesota.  Vaya con Dios (Godspeed) Arturo.

The only position in the immigration reform debate that is most certainly wrong, is the position that represents that no changes need to be made to the current system. It is truly broken.

The solution is simple but not easy.

If the existing laws had been enforced reasonably, we wouldn’t be in this current mess … but they weren’t and we are. There was plenty of unreasonableness to go around; I.C.E. raids with guns drawn on “some” facilities believed to have been employing migrants illegally, at least those who didn’t have the proper political protection. On the other side were cities like Chicago, Minneapolis and New York which openly declared sanctuary but still allowed “selective” deportation for visa overstays.

Selective enforcement of any law leads to inevitable discrimination and abuse by corrupt enforcers.You only need to look at the marijuana laws and the attendant bribery and coercion resulting from that capricious punishment to understand the folly of selective enforcement. 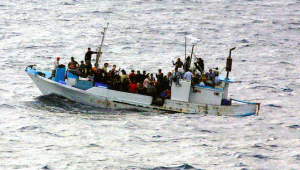 Refugees on the High Seas

The US is not alone in being assaulted with surges of illegal border crossings. Spain and Italy are seeing huge increases in African migration. The stories of the Africans are slightly different, they are not claiming to be fleeing gang violence and drug cartels, but they are tugging at heartstrings with their own localized versions about why they shouldn’t have to wait in line. It seems somewhat ironic that Spain is using enforcement tactics that would bring outcries of brutish tactics if employed on our southern border. From the UK Telegraph, Aug 13, 2014, “Spain has boosted police presence at its North African enclaves and in July reinforced its triple razor wire fences with anti-climbing mesh, measures that have seen the number of successful crossings diminish significantly.

To return to the US situation, these following are the minimum steps which seem evident to me, having been both an employer and an employee, to have some chance of effectiveness, while providing fairness and respect for our system of laws.

But again, it bears repeating that any system will fail if the laws aren’t enforced fairly. If the law breakers are rewarded and the law abiding applicants made into chumps, we all lose. This is true even if the reason for selective enforcement is compassion.

(Most Americans think that a Social Security card is required now, but it isn’t. Applicants only are required to show their SS card, “if it is available.” (see SS bulletin) This is an obvious loophole for fraud. Illegals simply claim it is not available and the employer has no recourse but to accept their word.

If new hires provide Social Security numbers that don’t match their name in the Social Security database, it is illegal for an employer to even ask to see a piece of identification. Hard to believe but true. (see D.O.J. bulletin) The reason given is potential racial or ethnic discrimination; so the solution is that we can’t question anyone. The unintended consequence is that illegals can game the system for years with a fake social security number.)

(Germany’s Gastarbeiter (Guest worker) program should be studied to avoid the pitfalls that made them sorely regret allowing tens of thousands of itinerant Turks into their country.)

Of course, actually enacting any of this is politically complicated and significant resolve will be required of our lawmakers to enact anything sane. We can only hope that any new laws will actually be enforced, as that is the only possibility for success. Selective enforcement will absolutely scuttle any reform … again.

What do you think? Take our poll.

5 comments for “A Nation of Immigrants – Which nation isn’t?”