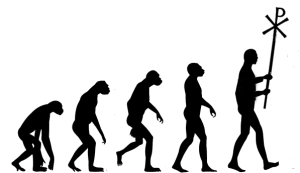 There are more people in America who say they don’t know the name of the Vice President than who believe that dinosaurs watched the pyramids being built or that border collies existed from he beginning of time.  (This may be literally true. See Pew Poll)


What about walking on water? What does science say about that?

Do Shinto believers in Japan get polled on whether or not they believe that Amerterasu, the sun goddess, was able to generate the energy of sunlight? Science says she should get burnt to a crisp.

Are Jews called by pollsters to see if they believe the Hanukkah miracle of the Maccabee’s eternal flame burning for eight days on a tiny amount of oil? it is, of course, a violation of the second law of thermodynamics.

Hard-core Creationists are only a very small subset of true believers. Lots of people who believe in God have no problem believing that Darwin’s or someone else’s theory of evolution might be correct or at least largely so. And that simply explains the mechanism by which God created new species.

There is ample evidence that creatures which used to be extant are now extinct. In many cases something similar, but different enough, is now alive. They have changed, or evolved, sometime in the recent or the distant past. By distant, we are talking millions of years. This really isn’t considered a theory by any modern definition of the term.

However, the mechanism of evolution is still an unresolved question. The mechanism, that is, which explains precisely how species got to the present state of extinction/existence,  There are several scientific theories to describe this mechanism of the evolution of novel species, Darwin’s being probably the foremost. (my note -Darwin is really spot-on with natural selection when it comes to extinction but so-so, at best, when it comes to novel species. He admitted that he just couldn’t explain the gene vector for the punctuated equilibrium he observed. And epigenetics hadn’t been even considered yet in his time.) 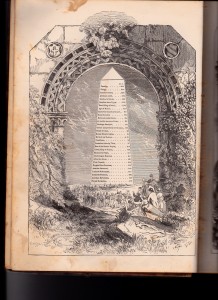 In the late 1600’s, James Ussher, Bishop of Armagh, Church of Ireland (think Anglican a half-century after Henry VIII) did a classic study of the chronology of the bible and decided that the precise date of creation was 9 am, October 3, 4004 BC. (By the Julian calendar, and presumably Greenwich Mean Time (GMT), although it hadn’t been named yet) Many Christians accepted this, most didn’t seem to care. As time passed and science advanced, the age of the earth seemed to be much greater than 6000 years, but some clerics thought it was true to the bible nonetheless. Some small handful still do, apparently accepting it as dogma.

But is it really refutation of science, or something different? One of my benchmarks in attaining what I consider adulthood, was the ability to maintain in my brain, simultaneously, two apparently contradictory beliefs. I say apparently, because I have learned that almost all dualistic opposites are false, their conciliation has just yet to be revealed. I personally learned this through the study of Aikido, a non-violent Japanese martial art.

Even William Jennings Bryan, a famous early 20th century orator/politician and a poster boy for creationists acknowledged that 4004 BCE was not a firm date for creation. He opposed Clarence Darrow in the renowned “Scopes Monkey Trial“. His loss there was supposed to have driven the final nail into the coffin of Creationism.

Polls, like this recent Gallup Poll consistently say that about 40% of Americans overall believe that the earth was created along with humans in their present form less than 10,000 years ago. This number is higher with white evangelicals. (Interestingly, the number is about the same (40%) for Catholics, yet Catholic doctrine as far back as Pope Pius XII finds no problem with evolution over millions of years as an explanation of how God created the world. More than half of all Muslims worldwide claim to not believe in evolution and their clerics seem split on the issue.)

Now it does appear that the way the question is asked has a huge impact on the results. National Science Foundation polls for several years have shown that although 40% say they believe that the earth was created less than 10,000 years ago, only 20% disagree with continental drift occurring over millions of years.

So how does that work exactly? Half of them say the earth is less than 10,000 years old and these same folks also say that earth’s continents have been moving for millions of years? Here is a possible explanation.

In ancient Greek legend, Odysseus encountered Polyphemus, the one-eyed Cyclops and son of Poseidon, who wanted to eat Odysseus’s fellow sailors. Odysseus had the presence of mind to know that he was dealing with a beast without reason.
His mission became to “confound the beast”. He misled and manipulated the poor monster into letting his crew go free and only later did he skewer the hapless creature in the eye with a sharp stick.

Perhaps a significant number of these respondents are simply confounding the beast. They see the pollsters as invasive and unwanted. They don’t trust a stranger’s motives and don’t want to risk saying anything that would play into the larger scheme of painting them as illiterate ignoramuses. That also probably accounts for a number of those 21% who claim to not know that Joe Biden was Vice President. And then, of course, there are those who really just don’t know.

But back to the original question. Why are conservative politicians asked if they believe in evolution? The question is usually asked to try to make Creationists look stupid, but it is also meant to pigeon reasonable conservatives into a corner. If they answer at all, they risk alienating Creationist conservatives or giving the educated elite fodder for mockery.

Remember ours is a government of, for and by the people, Our democracy is a noble experiment precisely because it lets everyone vote, not just the smart (rich and connected) people. Stupid-ism may be the last bastion of prejudice, but it can’t justify cancelling one’s right to vote.

I, for one, care much more about what politicians think about political corruption, war, crime, and taxes.