Can we absolve the collective debt that humans owe to animals just by eating tofu? 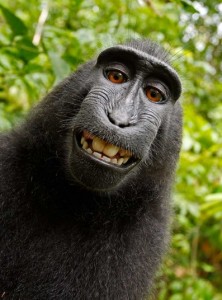 What’s for dinner? Would you like to try the blackened macaque?

Twenty-two years into vegetarianism, I had an epiphany that I was being hypocritical. I lived thru the winter with the benefit of modern grains and imported vegetables while self-righteously eschewing the consumption of the flesh of grazing animals raised five miles from my home.

Twenty-two years into vegetarianism, I had an epiphany that I was being hypocritical.

My organic shiru miso was direct from Japan, broccoli from the Imperial Valley and alar-free apples from New Zealand. Even my stone-ground whole wheat was hybridized beyond recognition by Norman Borlaug and his Green Revolution confederates.

We, humans, couldn’t live in the temperate climates like the US Midwest, let alone the Arctic, without the benefit of animals to store the sun’s energy for us through the winter. Yet, here I was, trying to get in touch with my primal inner-self yet flouting the most basic survival tenets of our species.

Humans evolved as hunter-gatherers and only started to rely heavily on cereal grains about a minute ago in evolutionary terms (~10,000 years ago give or take a millennia or two.) Even chimpanzees eat some meat and they never settled much farther north than Memphis.

Farmers are engineers; hunters are poets.

Farmers are in touch with the earth, right? Therefore, eating grains must be more holistic than eating meat, right? Farmers spend countless hours atop tinnitus-inducing behemoth tractors, GPS’ing the land into measurable rectangles that can be more easily controlled … controlled as in changed, tamed, made less natural. My corn and beans farming Indiana neighbors marveled at the abundance of earthworms I had unearthed while plowing. They admitted they hadn’t seen a worm in their fields in many years.

I learned this hard life lesson that farmers are engineers mostly on a bone rattling, tinnitus inducing tractor (minus the GPS) myself while trying unsuccessfully to earn an income growing organic Echinacea purpurea root.

Hunters are the romantics. Not hunters as in the Bambi-exploding weekend technology buffs; they might as well be piloting a drone with a bomb. But the hunters who recognize that their lives and those of their families depend on taking the life of another creature and they do it to that end, not for the fun. They do it with humility and passion. I have been unwilling to take this step except for killing and cleaning live fish that I have caught, which is difficult enough.

My own vegetarianism was, at best, “vegan lite” … ovo-lacto, for those who know the jargon. Included on my menu were milk products, like cheese, and chicken eggs. The eggs were exclusively from chickens for convenience and not, to my conscious knowledge, due to any philosophical belief that, say, duck eggs were not suitable fare.

We all have a cannibalism taboo. Even cannibals typically draw the line at their children and spouses, I am told. Everyone just chooses their own point of demarcation at a different place on the evolutionary developmental or social kinship scale. Mine was drawn at vertebrates. If you had an enclosed backbone, you were enough like me to be safe from my predation. My conspicuous exception from that otherwise totally logical rationale was the octopus. I just couldn’t bring myself to eat anything smarter than my boyhood neighbor Ronnie, regardless of its leg count or lack of vertebrae.

If you are a confirmed meat eater and don’t agree that you have a cannibalism taboo, then imagine your choices for dinner were these: 1) a bowl of nuts and grains and vegetables; or 2) a monkey steak. Here’s the rub … the monkey is still alive. No, you don’t even have to kill it. The chef will lure it down from its perch on the hurdy-gurdy. You only need to take away the little tin cup and point out which body part you want him to lop off with his cleaver and grill for you. Cajun seasoning or just salt and pepper? 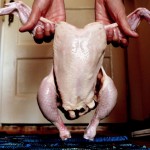 If it looks like it were ever a living creature, it can trigger the cannibalism taboo.

Admittedly, the taboo tends to manifest itself in quirky fashion. Some cultures eat dogs, cats, horses and monkeys but we don’t here in the USA. We have developed the practice of granting honorary kinship to our pets … as I did to octopi.

… the animal … comes willingly to be killed. But … with the understanding that it will be killed with gratitude. – Joseph Campbell

In his comprehensive study of humans and the origins of our philosophies, Transformations of Myth through Time,  Joseph Campbell reveals on page nine, “The basic mythic theme of hunting cultures is that the animal is a willing sacrifice. It comes willingly to be killed. You can find this in the myths all over the place. But the animal comes with the understanding that it will be killed with gratitude, that a ceremonial will be conducted to return its life to the mother source for rebirth, so that it comes again next year.”

While it may be disrespectful to not show gratitude to the slain creature, it is downright insulting to deny that it ever was an animal, to deny that it had a life to give.

You’ve heard it many times as the trout is offered at the table, “I don’t want the eyes looking at me.” An extension of this hypocrisy is the notion that meat must be trimmed of all fat, sinew and cartilage, anything that might betray its relationship to a living animal. The closer it looks to tofu or flavored wheat gluten, the more acceptable it becomes … and the less guilt it bestows upon the diner. 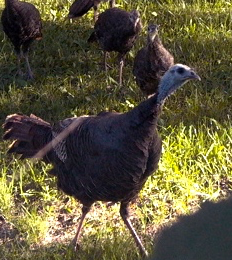 Wild Turkey in my yard in Northwest Indiana

My own intention to mark my departure from the ranks of vegetarianism was to personally slaughter and cook a turkey on Thanksgiving. However, in spite of the fact that I was riding high on my newly redirected self-righteousness, the turkey got a reprieve because I “chickened out.” In the end my passage was via a “store bought” (albeit free range) turkey. My consumption of its heart and liver was performed with great solemnity … and gratitude.

The admonition to “walk softly upon the earth” is valuable counsel. Equally valuable is the ownership of the consequence of our existence on this planet. It might be useful to remember that even the Dalai Lama’s house was once virgin prairie.

Humans owe a collective debt to the other creatures that we have displaced and killed for our survival. The least we can do is say, “Thank you”.

Please answer the question below as though it is lunchtime and there are only two choices: vegetarian chili or grilled monkey.

11 comments for “Vegetarians and Cannibals”